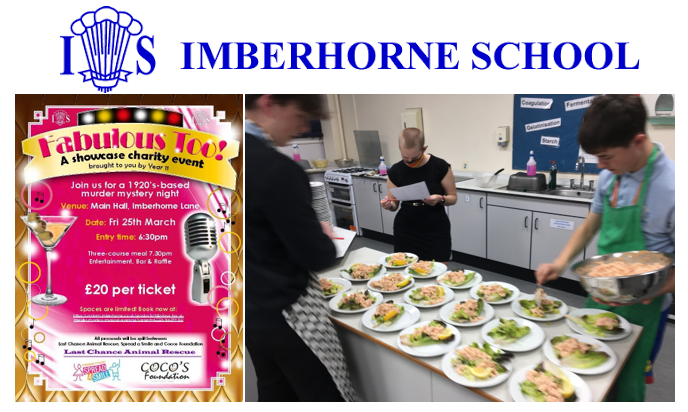 Every year Imberhorne students graduate from year 11. Every year apart from the two years of Covid however! This year’s Year 11 students at Imberhorne, who moved up from Lower School as the first lockdown commenced and had a second stint at remote learning from January to March in 2021, were keen to turn the tide.

So when Rob Langstone the school’s inspirational Head of Year 11  created one last opportunity to fundraise he launched the  ‘Fabulous Too’ evening of cabaret and music with a four-course supper.  It wasn’t surprising that sixty enthusiastic and creative students took up the challenge and decided to jump on board. Some led on food production in the training kitchens, some led on foodservice front of house in the main hall, whilst others deployed their skill set as part of the murder mystery cast, and others entertained with music and songs. If that wasn’t impressive enough, the week prior they had just completed their second lot of mock exams!

As this was a charity event, the year group proposed and picked three charities. The criteria was simple: one local, Last Chance Animal Rescue, one national, Spread a Smile and one international, Coco’s Foundation, were the final three shortlisted.

The next port of call was the East Grinstead Business Association – with over 125 members in the town it made sense to ask local businesses to support the local schools, and as always they did not disappoint. The appeal for raffle prizes resulted in donations from Martell’s, Volume 1 Climbing, The Tasting Rooms along with other businesses from the town.  The hospitality was made possible thanks to Lisa Friend, Community Liason at  Waitrose East Grinstead for supplying much of the menu ingredients, allowing the event to contribute more cash to the charities. Thank you to the award-winning Stones Family Butchers for providing the chicken at a very reasonable cost price. Thanks also go to the Felbridge Hotel for supplying napkins and service clothes, to Apple and Cor! for supplying all the bone china crockery, who have supported the school’s initiatives even though they have had a tough time during Covid, and to Co-ordination Event Hire for lending us all the glassware.

Goodwill at Imberhorne was also not in short supply with Hanna Froger the school’s Head of DT, Nicola Quick, the head of RE supporting the kitchen under George and Josh’s stewardship.  Dan Celani, Head of Year 10, Kim Bus and Helen Luxton the Key Stage 4 Secretaries, Bethany Browning and Sibel Latchman the Assistant Heads of Year and Hannah Ballasis and Angela Jones, both Year 11 tutors for giving up their Friday night and being the back up on the floor, as well as setting up and running the bar.  A little bird tells me that Martin Brown, the Head was relentless in his contribution from 4pm on the dishwasher.  Not sure if he volunteered for that job, or if it was the only job left on the night but he was on the pans until 11 pm, bless him!

Sixty parents and carers of year 11 students bought tickets, not knowing how this one night only event would pan out, but the combined contributions raised a grand total of £1276.14 that’s a whopping £425.38 per charity.  Well done Year 11 who took responsibility for all the setting up and entertainment plans before and on the night.  This all culminated in them having enough evidence for charity fundraising in their Record of Achievement to graduate with a distinction.

Young people are resilient, committed, care and can be trusted, we all just need to work collaboratively to give them as many opportunities to show how bright they can shine.