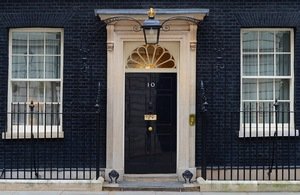 The Prime Minister spoke with over 130 business leaders today on the progress in Brexit negotiations, following the European Council this week.

First, she recognised the importance of these discussions for businesses, their supply chains and clients. She outlined that the Government’s proposed future relationship with the EU would preserve the UK’s and EU’s frictionless access to each other’s markets for goods, protecting jobs and livelihoods on both sides.

She set out the significant progress that has been made on the Withdrawal Agreement and on our future relationship with the EU. She acknowledged that there were a few significant issues that were still outstanding, but said that the very real sense she had from leaders around the table at the Council was that they wanted to reach a deal as soon as possible this autumn.

Second, the Prime Minister spoke about the Northern Irish backstop, which is intended to guarantee that – in the unlikely event that there is a delay in bringing into effect our future relationship by the end of the implementation period at the end of December 2020 – there is no return to a hard border between Northern Ireland and Ireland. If required, this would therefore only be necessary for a temporary period to act as a bridge to the future relationship.

The Prime Minister explained that the UK could not accept the EU’s proposal which included an arrangement in which Northern Ireland could be kept in a separate customs territory to the rest of the UK. She advised that our proposal included a UK-wide joint customs territory with the EU for the duration of the backstop, which would protect the integrity of the UK and deliver on the commitment to avoid a hard border with Ireland. She emphasised that both sides wanted to have our future relationship in place by the end of December 2020 so that the backstop never needed to be used, but that the negotiating teams would work intensively on this to find a way forward.

Finally, she urged businesses not to lose sight of the prize – that of a smooth trading relationship with the EU alongside the ability to seek new opportunities and open up new markets with trading partners around the world.

The Prime Minister took questions from businesses and representative bodies (Centrica, EY, Diageo, Enterprise Nation, RBS, Federation of Small Businesses, ITV, Aston Martin, Barratt Developments and Tesco) on topics such as the importance of frictionless trade, the implementation period and opportunities for the future.

A number of businesses thanked the Prime Minister for the opportunity to speak with her directly on the Brexit negotiations.